The Trauma of Childhood Sexual Abuse 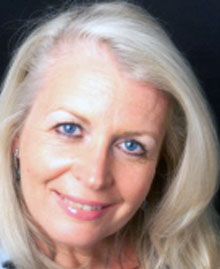 Christiane Sanderson gave her workshop on unlocking the trauma of childhood sexual abuse with Brighton Therapy Partnership in November 2015. This was a sold out event, so we know some of you may have missed out – that’s why we’ve neatly packaged some of the key takeaways for you here, looking at the more common experiences of a survivor, the therapeutic model, and the presence of shame.

Control is the predominant issue in childhood sexual abuse.

The Safe Trauma Therapy Model follows a process, which may not be linear, that covers the key skills and tasks of the therapist in working with a survivor of CSA. The process will

Learning to cope with the trauma of childhood sexual abuse

Psycho-education on affect regulation can help survivors to understand what happens to them when they become anxious, angry or frightened for example, and help them cope with the trauma of childhood sexual abuse. It can also provide them with the skills to learn so that they can influence how they feel.

The Window of Tolerance

Pat Ogden’s Window of Tolerance model can be used to work with survivors in session, by providing an opportunity to experience feelings in the safety of a therapy session (pleasant ones to start with, like getting excited or laughing) and also the experience of calming these feelings (i.e. through breathing exercises or other mindfulness techniques). Later, the survivor and therapist can move on to practicing with less pleasant feelings. 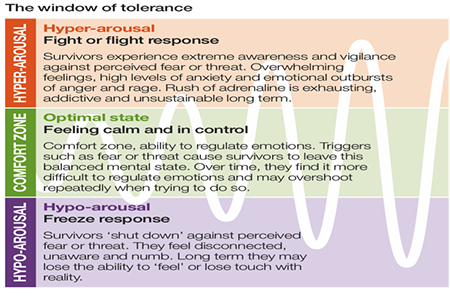 Any ‘right-brain’ techniques can also be helpful – creative work, using drawings, play-doh, nesting dolls, bubbles (you have to breathe if you blow bubbles, so this can be helpful for clients who become breathless and stressed), playing catch with a ball (you have to be present to catch a ball, so this can be a useful antidote to being dissociated).

Physical activities are also worth pursuing. It is worth being aware that traditionally restful activities such as yoga may not be appropriate for a client who has experienced childhood sexual abuse, as in the initial phases of therapy the slowness and ‘floppiness’ of such activities can feel more dangerous than activities that allow for more muscle-tensing and physical exertion (such as kick-boxing or martial arts). Often it can be safer to stay with more ‘active’ activities until emotional stability is reached.

Therapy and the position of power

Flashbacks are raw unprocessed memory (whether they occur during the day or at night). One of the key ways to work with flashbacks is to work on stabilising emotions generally and allowing the memory to be processed safely. With flashbacks (especially night time ones) survivors may find it helpful to record the flashback (by writing it in a journal, for example), then do some emotional stabilisation exercises (breathing, mindfulness, for example), before moving on or returning to sleep.

It is important to distinguish between shame and guilt when working with survivors of childhood sexual abuse. Guilt is defined as an emotion that is experienced cognitively and about which it is possible to make reparations. Shame, on the other hand, is described as being an embodied emotion which, in the words of Jung, “infects the soul,” and impacts on the whole person.

Defences that the survivor might use against shame include…

Pure-O is a type of OCD (Obsessive Compulsive Disorder) that is a common experience of many childhood sexual abuse survivors. Pure-O tends to have few, if any, external manifestations typically found with OCD, such as the need to perform rituals, but is experienced solely within the mind of the sufferer. For example it might be experienced as constantly running thoughts, ruminations, obsessing on thoughts such as ‘what is the worst I could be’ (and for a survivor of CSA that is likely to be an abuser or rapist or to be the person who abused them). It is thought to be the result of a failure of self-soothing. The OCD-UK Charity have produced a leaflet on Pure-O.

Thank you for reading – we hope that this article has provided useful insights into the trauma of childhood sexual abuse. If you’ve found the article interesting and useful, please don’t forget to share it with your colleagues and fellow therapists! We hope to see you at a Brighton Therapy Partnership event in the near future.