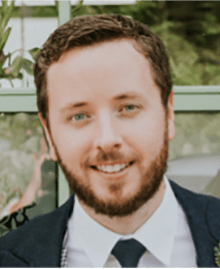 Adam Getty is a BABCP accredited CBT Therapist and EMDR Europe Accredited Consultant based in Mirabilis Health Institute, Belfast. He specialises in trauma focused EMDR therapy including working with the psychological impact of traumatic events on civilian and security forces.

Adam will be the trainer of our 1 day CPD event EMDR: The Breakthrough Therapy on 10th September 2022.

This will be a one-day introduction to EMDR, and also a good preparation and exploratory day for anyone wishing to undertake the 8-day qualifying training in EMDR.

The following interview provides an insight into Adam’s work and how he got into it.

Where it all began…

“My journey started at the age of 11. I was diagnosed with a brain tumour and spent a year in hospital. After my second operation, I had a visitor from the school principal who my mum, a teacher, worked with. She sat down beside me and asked me how I was. I said “I’m fine and I’m recovering”. And she asked me if I had had any visitors. I said, “Yes, everybody’s coming to visit me. And they’re bringing me cards with money and chocolate”. I opened up this little side drawer and showed her all the stuff that people had got me. And she said, “that’s really nice. People are really kind, aren’t they?” She said, “you know, you’ll never be able to fully repay those people back for their kindness, but a way that you can do that is to help other people”.

And that stuck with me.

At the time I didn’t know what I was exactly going to do, but I knew I wanted to help other people. I ended up doing a degree in Psychology, where I did a placement year in an inpatient unit in England working with people with severe mental health difficulties, such as bipolar and schizophrenia.

The clinical leader at the time, was talking about this thing called CBT, which I didn’t think too much about at the time, but subsequently ended up training in. After years of training and getting into it, I really enjoyed my work getting in involved in working with trauma and complex trauma, which has blossomed into where I’m at now.”

What has been your therapy journey…

“I qualified in Northern Ireland in 2013 and moved to England to work as a high intensity CBT therapist. But of course, there’s no place like home and a job came up with the Department of Justice in Belfast a few years later.

It involved working with people with really quite complex PTSD, serving and empowering first responders including police officers. And that’s where my love of EMDR developed (combined with trauma focused CBT) as an evidence based therapy for PTSD.

They supported me in my EMDR training in 2015 and I worked with the Department of Justice for five years before going into a regional trauma network within the NHS, where I did a lot of CBT and EMDR focusing on trauma.

I received a lot of supervision and then did a master’s in clinical supervision as I see supervision as fundamental to an individual’s professional development. Over the last decade, I have had the opportunity of teaching and supervising at Queen’s University on the postgrad diploma and CBT, which I have really enjoyed.”

Working with trauma in Northern Ireland

“In Northern Ireland we’re famous for our failures, including the potato famine and The Troubles etc. During The Troubles many police officers experienced 30 years of trauma.

What’s unique about Northern Ireland is that the police officers who were in the trauma zone, when they retire, they are still living in trauma.

So, in 2015, I moved back to Northern Ireland and worked with the Department of Justice, with individuals who were still serving and also retired first responders, mainly police officers who had Complex PTSD. We’re not talking about single incidents here. We’re talking about multiple incidents, over a 30 year career.

I have a strong affiliation towards first responders. I think that the work that they do is tremendous. And they are wonderful people, for what they do and what they’ve been through. So that’s, that’s where my passion for helping people with trauma started to grow.

It’s heart breaking, but there’s a lot of hope. We’re now doing a lot of training with first responders and teaching mental health professionals, how to do a form of G-Tep so that they can go in and help their staff process and get some symptom reduction around the stress and incidences. It can be a difficult job at times but it is still very rewarding.”

If you weren’t a therapist…

“It’s a tough question! I think I would have been a first responder. Since I was 11 and in hospital it’s been about wanting to help people.”

In this video Adam introduces his talk for the BTP *EMDR: The Breakthrough Therapy*:

If you would like to hear more about EMDR, then why not join us for the upcoming BTP online event: EMDR: The Breakthrough Therapy on 10th September 2022 with Adam Getty.

We have recently created a private Facebook Group for therapists which might be of interest to you if you are on social media? You will need to answer all 3 Joining Questions and agree to the Group Rules to join the Group!