Perspectives on Interpretation in Psychoanalytic Counselling

Dr Maggie Turp, Dr Aaron Balick and Patrick Casement came together to discuss the nature and value of ‘the interpretation’ in counselling. Is it still a valid therapeutic tool? Or has it reached the end of its useful shelf life?

The art of interpretation is considered a cornerstone of psychoanalytic psychotherapy and counselling. By means of ‘the interpretation’ the therapist will observe and comment on actions and motivations just outside the awareness of their client.

In the best version of this approach the therapist will make gentle suggestions that can offer a new angle on the issue at hand that somehow feels ‘right-enough’ or ‘certainly-possible’ to their client, and in this way the therapist can assist their client to increase their level of self-insight and knowledge. Less helpful versions of the interpretation mode of intervention certainly exist, and can be experienced as clumsy, uncaring, and critical by clients.

This one-day conference with three leading thinkers in the field of psychoanalytic thought questioned the nature and value of ‘the interpretation’, asking what other interventions might be equally valid. The meaning of interpretation was explored within the context of the therapeutic relationship, asking questions such as ‘Who benefits?’. 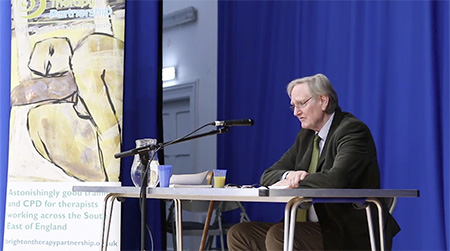 The three speakers focused on perspectives on interpretation within counselling.

Maggie Turp began the day by providing a fascinating though easily accessible discussion on finding the balance between transference interpretation and narrative repair in psychodynamic psychotherapy.

The overuse of interpretation

A key message in Maggie’s talk, and theme that would be carried through the day, was how the overuse of transference interpretation (of observing and commenting on actions and motivations just outside the awareness of their client) can produce a number of problems. Sessions can become predictable and formulaic, with the client able to predict exactly the kind of thing the therapist is going to say, or the patient cannot take the abundance of interpretations in.

Weighing up the use of interpretation alongside other interventions, Maggie made the point that there are other vitally important aspects of therapeutic work which can suffer as a result of the lack of space left due to overuse of interpretation. An important ‘other’ element that Maggie focussed on was that of narrative repair, referring to the endeavour a therapist would undertake to heal a client’s fragmented self-story.

Interpretation and narrative repair – getting the flavour right

Of course we know in the case of the strength of chilli in a curry that individuals have different tastes, so too much chilli for one person might prove mild for another. And so, in psychotherapy, the ‘level of chilli’ applied isn’t an exact art, and Maggie emphasised the importance of gauging the subjective needs and analytic resilience of the patient/client in order to utilise appropriate levels of interpretation.

To help with our understanding of the importance of gauging interpretation use, Maggie talked about the psychoanalytic concept of the psychic skin boundary as a metaphor for a barrier that regulates communications coming in from the external world and going out from the internal world. She quoted Winnicott (1953) who said that keeping the inner and outer reality separate yet interrelated is a perpetual human task, and the porousness of the psychic skin achieves that separateness and connection.

In counterpoise, Maggie talked about how narrative repair focusses around the notion of the ‘narrative skin’. Psychoanalytically, the client’s capacity or otherwise in being able to construct and maintain narrative continuity arises from the strength of the ‘narrative skin’ which is created around them in early childhood by their primary caregiver. An ‘ordinary good-enough parent’ (Winnicott) stories the baby’s experience for them by talking them through their day – a process that continues through childhood. A client who has not had the advantage of parental narration will need help in creating/re-creating their self-stories.

Maggie also talked about how interpretations can be intrusive and/or ill-timed, inflicting further damage on an already damaged psychic skin boundary, with differing outcomes depending on the client: in the case of a ‘toughened’ patient this can provoke mistrust, suspicion, angry retaliation or withdrawal; with a ‘porous’ patient it can provoke superficial compliance and ‘as if’ relating. Ill-timed interpretations can happen if the therapeutic alliance isn’t sufficiently established or if interpretations are given too frequently and the client is unable to ingest/digest and make use of what is offered.

A challenge to the client’s perspective

Maggie spoke about the potency of interpretation and how it should be used with full knowledge that it will be, to a greater or lesser extent, a challenge to a client’s way of seeing things – ‘after all’, Maggie said, ‘we are attempting to bring previously unavailable awareness and insight to our client’s self understanding by offering novel ways of seeing oneself’.

Finally, Maggie pointed out a further peril surrounding the misuse of interpretation, when it is used for the ‘good’ of the therapist. The therapist can ‘act out’ in an unconscious or conscious endeavour to restore the balance of power in response to envious or other attacks on the part of the patient.

For more, see our interview with Maggie Turp.

Extend your learning on Interpretation further

Dr Aaron Balick gave an open, transparent, non-jargonistic account of a single therapeutic encounter with a client, and the ensuing re-enactment with the client around the theme of money and payment. The audience was treated to a delightfully eloquent account of what can happen between a therapist and their client when interpretation is too heavily relied upon. 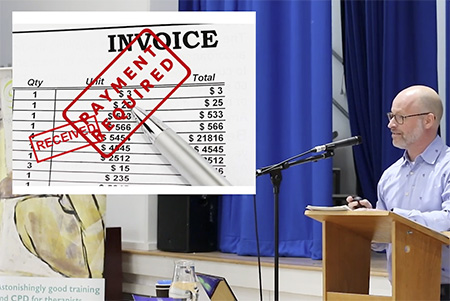 Getting caught up in yourself

The enactment Aaron described demonstrated the intense complexities that so easily arise in therapy and how easy it is for a therapist to get caught up in one’s own process. It really felt like being ‘in the trenches’ with Aaron as he painted a clear picture of what an enactment looks like. As Aaron put it, ‘when your countertransference gets hooked into a client’s transference, instigating an enactment, you can end up not really dealing with ‘the problem’ which is, simply, that the client feels bad about dealing with money. You end up colluding with the client’s difficulty with your own anxiety over money’.

For more, see our interview with Aaron Balick.

Patrick Casement – Why Do We Interpret?

For many, the ‘main event’ of the day came from the opportunity to hear Patrick Casement. Guided by the general theme of ‘why do we interpret?’, Patrick gave a moving and entertaining account of his life’s work and experience as both a social worker and a psychoanalyst. He drew on clinical anecdotes drawing attention to his deeply interpersonal understanding of the use of interpretation. As he said, quoting a past client, the ‘inter’ part of interpretation highlights how insight is arrived at between people.

As anyone who is familiar with Patrick’s work will know, betweenness and mutuality are central tenets of his theories, as is the importance of listening (and learning) from one’s clients. Patrick spoke about how, as beginning-therapists, we often experience a strong incentive to demonstrate, at least to ourselves, that we are competent; so we seek out opportunities to interpret. But he warned about the overuse of interpretation and, through the use of clinical examples, demonstrated ‘wild analysis’ in the early days of his working as an analyst, how unwieldy over-interpretation might alienate a client.

I found that Patrick’s approach gave me heart, that as a beginning-psychotherapist myself, I could be reassured that even the most accomplished therapists learn the hard way! When Patrick described the ‘aha’ moment that often precedes the urge to interpret, I was reminded of my own eagerness at times to demonstrate competence in the therapy room. Patrick’s example of going in ‘heavy booted’ with what we think is understanding can often ‘add insight to injury!’

Patrick identified another caution against leaning too heavily on theory; as the philosopher Carl Popper warned, there is major problem with theory because we tend to only see things that confirm our theory and turn a blind eye to anything that might question it. As Patrick observed, this can so easily happen in the consulting room, and we should also ask ourselves, ‘who is putting what into the analytic space and why?’. When we are giving an interpretation, whose mind are we giving expression to? We may think we’re interpreting something we assume to be in the mind of the patient, but we cannot say this with certainty. So we need to have caution all of the time.

To that end, Patrick identified a subtle but useful difference between ‘giving’ and ‘offering’ interpretation. To give ‘leaves the patient no choice but to accept or refuse’ the interpretation, whereas to offer is ‘something that can be held mid-air between the patient and myself’. Patrick compared the ‘half-interpretation’ to Winnicott’s squiggle game – it offers something for the patient to think about, to play with, rather than something overly concrete an inflexible.

The three speakers focused on perspectives on interpretation within counselling.

Patrick recommends the use of observations rather than interpretation, that our clients didn’t always need us to interpret, that we could ‘interpret to ourselves’ to get an understanding of what might be going on and allow the client to find their own way, or at least, meet the therapist half-way. Allowing a patient to explore an ‘offering’ and ‘get to it’ when they are ready is important.

The importance of staying in the present

Patrick talked about the importance of knowing whether we are making connections or finding connections. He favoured the idea of ‘finding connections with our patients’ rather than ‘giving connections from the so-called benefits of our understanding. ‘We are often working at the interface between the past and the present’, but often our ideas take us too readily to the past, away from the here-and-now, ‘into archeology’, which, Patrick pointed out, is often ‘much safer’. ‘It’s not in the present, it’s not ‘red hot’ anymore, we can understand it ‘out there’. In summary, Patrick warned against intellectualising, which is ‘not the great gain we might imagine it is’ and ‘deflects attention away from the immediacy of the person to person encounter’.

Listening is at the heart of it all

Patrick concluded by asking the question, ‘what makes the difference? Is it having bits of unconscious being dug up by the skill of the analyst telling a client ‘what’s really happening?’. Patrick left us with the message that clients often merely want to feel that they are being listened to, and being understood through their own mind – not given understandings – and how important that is for them. As one client told Patrick at the end of a session ‘I feel I have, here, the freedom to be, and be myself. That is so precious, it didn’t need any interpretation’.

For more, see our interview with Patrick Casement.

The day was concluded by a 3-way question and answer session. The audience were finally treated to in-depth discussions about what happens when the therapist ‘gets it wrong’, what place and use humour has in the therapy room, how we manage a therapy with a client who says ‘I don’t want to open a can of worms’ and what the difference is between meaning-making and ‘arriving at the truth’. There was an enlivening and, at times, entertaining interaction between the audience and the panel, rounding off a thoroughly pleasurable and educational day.

The Perspectives on Interpretation Conference will be available to watch in full wherever you are in the world through Brighton Therapy Partnership’s new Online CPD Service soon. To find out when it’s released, sign up to our mailing list.