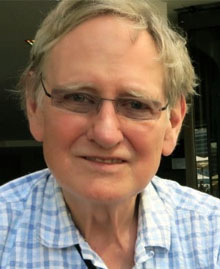 Patrick Casement will be speaking at our upcoming Interpretation Conference, alongside Maggie Turp and Aaron Balick. Patrick’s topic is ‘Why do we interpret?’

We interviewed Patrick to talk to him on the topics of his work, his life, and his feelings around the direction of therapeutic practice. Learn from one of the greatest minds in our profession, whose career was rich with experiences and whose made it his mission to continuously be ‘learning from life’.

I started as a patient in need: a failed suicide. I didn’t actually choose to become a therapist. The idea had never occurred to me while I was working as a social worker. In the end I trained mainly to please my therapist – something she saw as better than killing myself! But this became a false-self solution to my much more fundamental problems. I describe in my book Learning from Life how I eventually became a psychoanalyst.

Your book On Learning from the Patient has been recommended reading on training courses for counsellors and psychotherapists for decades (my own included!). What was the inspiration for this book?

I had not intended to write a book. But the idea of learning from the patient gripped me when I came to realise that it described an approach to patients that had evolved from my resistance to the more usual application of theory to patients. I felt that I should try to communicate this view of clinical work to others, and my first book grew out of that exploration. It then just took off and it has so far picked up 21 translations, in the 31 years since it was first published.

You’ve now written five books, including an autobiography called Growing Up? A Journey with Laughter published in 2015. Which of your writings are you most pleased with or proud of? I wondered if you had a favourite, or one that was particularly satisfying to write?

I am naturally proud of my first book as it continues to be much used, now into its fourth decade. But, for me, it is Learning from Life that I regard as the most important (to me) as it brings everything together: all that grew out of the rather strange journey which led eventually into clinical practice. But the book I most enjoyed writing is Growing Up? A Journey With Laughter. It was such fun to write and it was put together to celebrate my return to life, having not been expected to survive my then ‘terminal’ cancer.

There’s been a real growth in the provision of counselling and psychotherapy training in recent years. Does this seem like a good thing to you? I wonder if you would recommend a career in psychotherapy to people thinking about training?

I have some problems with this. I think that there are too many people wanting to practice as therapists or counsellors, and I think they are a pretty mixed bunch. I also think there needs to be a full sense of vocation, preferably growing out of a recognised need for therapeutic help for oneself, rather that it being seen as a job that one might do.

You’re now retired from clinical practice, what are you enjoying most about being a retired psychotherapist?

Although I have been retired from clinical work for over ten years, I still love doing some supervision or consultation. But I also appreciate the freedom now to travel when the whim takes, rather being tied to the working schedule I always offered to patients. Also, it is only now that I am retired that I realise quite what a weight of responsibility for the lives of others I had been carrying for the past 40 years. I don’t miss that.

If you hadn’t been a therapist, what would you have been and why?

I don’t think I can imagine what else I might have done. I had to follow where my own evolution took me. I just could not have done otherwise if I were still to remain true to myself.

The following books are also available:

On Learning From the Patient

On Learning From our Mistakes

On Learning From Life