Existential Perspectives on Anxiety and How it Can Inform Practice

The follow was written by Farrah Collins, a counsellor with The Palmeira Practice

This article highlights how existential thought and argument from the key existential philosophers, as well as more contemporary writers, can inform therapy. Existential therapies have provided me with a critique of the mainstream ideology and practice within the medical model (Laing, 1960; Boss, 1979), and has offered a different perspective in regards to anxiety and “anxiety disorders”. The medical model of anxiety diagnoses and medicates anxiety; whereas an existential view poses that anxiety, as anguish or angst, is important and necessary to live a full and authentic life. (Cooper, 2003; Strasser & Strasser, 1997).

Anxiety in the medical and existential models

When looking at the tenets of the medical model and its current attitude to anxiety, it can be seen that anxiety is characterised as a result of the”flight or fight” reaction, possessed by all human beings in response to threat (Cannon, 1929 as cited in Wolfe, 2005), and the current thinking within the biomedical model points to various neurological and biological mechanisms malfunctioning and causing “anxiety disorders”, which is consequently treated with anxiolytic medication (Johnson and Lydiard, 1995 as cited in Wolfe, 2005). I do not wish to wholly discount the necessity of a medical model, or the use of physiological treatments. However, my thinking as informed by existential thought, is that the medical model perspective on mental health can pathologise anxiety and is not always helpful to all clients.

I believe that the argument characterised above can be seen in the seminal work of Medard Boss (1979), a Swiss Psychiatrist and Psychoanalyst. His work looks at the existential implications on the treatment of organic illnesses in the medical model, which was pertinent at the time, but I think is also relevant in today’s society. In his book (Boss, 1979), he questions the assumptions made in modernist and medical model treatments, as to what it is to be human, what the meaning of health and illness are and questions the cause and effect treatment strategies of medicine, as evident still in our current National Health Service. Boss attempts to overcome the Cartesian mind and body split; he opposes physiological reductionism.

My experience of the medical model

I find his arguments entirely plausible given my own personal experiences with the National Health Service. After a month of stomach pain, three trips to my GP, and various tests, I was told that the symptoms were indicative of various undefinable digestive problems and told to take medicine to stop the pain when it started. However on re-evaluating my situation at the time, I was able to eliminate various stressful triggers and have been well to date. What was difficult in this situation was the lack of emphasis on what was causing my symptoms, what meaning they had either physically or mentally, and instead all emphasis was put on symptom management. This treatment of symptoms, rather than a look at the meaning of them, seems to miss the point of helping people to achieve long term mental and physical health. With anxiety, the labelling and subsequent treatment in the medical model aims to remove or manage it, but what existential thought argues, including Boss, is that the neurotic anxiety which presents as symptoms is a manifestation of existential anxiety avoidance, which can hinder a person’s attempt to live an authentic life (Van Deurzen & Kenward, 2005). 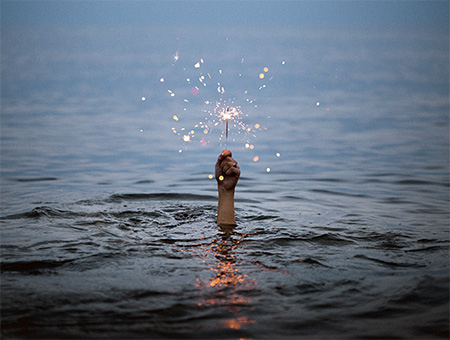 The medical model fails to adequately address anxiety, only its symptoms. Until we take an existential perspective, we cannot understand how anxiety fits with what it means to just ‘be’.

Laing was also influenced by European Psychiatry, and was a psychiatrist himself.  In his work, The Divided Self (Laing, 1960), he rejected the assumptions of the psychiatric world of his day, which again is pertinent today. He criticised the violence perpetrated upon those labelled with diagnostics and institutionalised, the breakdown of any form of human relationship between psychiatrist and patient, the inherent power dynamics in that relationship and finally, that in the labelling and dismissing of symptoms, medicine and psychiatry were losing the meaning behind these symptoms.  For example, with the labelling of people with “anxiety disorders”, the anxiety and its meanings for people, as they attempt to deal with their world, could be entirely lost.

This is the risk when pathologising anxiety and trying to remove it with medication. Laing spoke a great deal of ontological insecurity, and the fear of annihilation in those who were having mental health issues, which more recent existentialists have picked up upon, and consider to be pure existential anxiety, the dread of nothingness, that is experienced by everyone (Van Deurzen, 1998). For Van Deurzen, this anxiety must be faced and unlike Laing suggests, people cannot be “cured” from the ontological insecurity, thus she critiques Laing of being unable to fully depart from the medical model he himself was so critical of (Cooper, 2003).

The implications of Laing’s and Boss’s critiques have  provided me with a more existential outlook on the medical model primacy within our society and the impact it has on my clients. Yalom (1980) believed existential issues had a number of clinical implications, and that existential anxiety was a driving force in psychopathology. May et al (May, Angel, & Ellenburger, 1958) states that it could be possible that anxiety, even at its most neurotic, is based in ontological anxiety and anguish. Existential anxiety has been described as the apprehension of something which lies beyond the normal, everyday concerns of our lives (Van Deurzen & Kenward, 2005).

Overall, valuing of anxiety and angst within the existential paradigm appears to be the emergent result of being open to what it is to face one’s human condition, with its freedoms, inevitable ending and isolating elements. This can sound bleak, and a critique of existentialism, is that it is too depressing and focussed on the negative (Cooper, 2003), but what is missed by such critics is that it can seem gloomy as it is undoubtedly frightening to face up to these existential givens but anxiety is a normal response and it allows us to truly live a life that is authentic, has meaning for the individual and where people can evaluate what is important. As a society, we live in a world where the medical model pervades all other forms of psychological and holistic therapy, but if we look at existential writing, it could be argued that this is resultant from our own death anxiety as a society, and subsequently this impacts on our treatments of those we label as having various disorders. The treatment of anxiety as a pathological notion, that should be numbed through medication, or managed away, without facing it to its depths, through CBT, seems to be a possible form of escapism.

How counsellors can help clients understand anxiety from an existential perspective

If we look at a Cartesian mind and body split, surely medicine will help the physical, but what about the thoughts and feelings of patients. If medicine, and in particular psychiatry, is unable to provide an outlook that addresses this, maybe the job of counselling psychologists is to step in here. This ethos has allowed me to try and see meaning in my clients’ anxiety, and thus highlight different emergent possibilities for them. For example one’s anxiety about our own death could lead to clients presenting with health anxiety – constantly and obsessionally worried about one’s physical wellbeing (Yalom, 1980).

If we can facilitate our clients to think about the meaning of their experiences perhaps it could enrich their lives, rather than being wholly seen as a collection of “negative thoughts”. When it comes to anxiety, we cannot “cure” that which is part of the human experience. There is much that the medical model provides up but perhaps adding a psychological and existential perspective can enhance our understanding of anxiety and help clients.