To anyone not trained in EMDR it can come across as almost magical. How, we ask, can waving our hands in front of the client’s face help them to heal? On 3rd March 2018 Sian Morgan (President of Trauma Aid UK, and EMDR Europe accredited trainer) visited Brighton Therapy Partnership to explain what EMDR really is, and how it works.

EMDR was developed in 1987 by Francine Shapiro and stands for Eye Movement Desensitization and Reprocessing. Francine discovered the phenomenon by accident as she was walking in a park, looking around at her surroundings and contemplating a traumatic medical diagnosis she had recently received. As she walked she noticed that for the first time since the diagnosis her intrusive thoughts had lessened whilst she was looking around on her walk. Having noticed the effect she experimented further and eventually identified that the movement of her eyes was responsible for the change in the way she was thinking.

EMDR is the result of research following Shapiro’s discovery, and focuses on treatment of emotional difficulties caused by disturbing life experiences (including natural disasters, combat stress, sexual assault, upsetting childhood experiences, and other negative experiences) which impact on present day functioning. EMDR is never a primary field of therapy, but works well as a complementary add-on to all of the major therapeutic models. 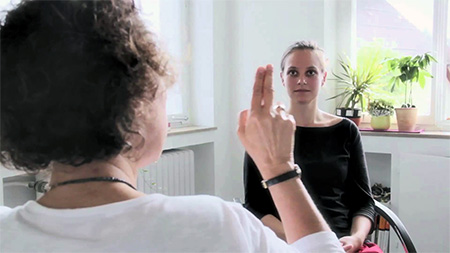 EMDR and the Brain

EMDR posits that the cause of current day issues resides in the memory of a traumatic event in the past being stored dysfunctionally in the brain. The memories have somehow got stuck in time where they can be triggered by current experiences as if the memory is in the present, causing symptoms in the here and now. It therefore uses psycho-neurobiological therapy which addresses the whole system at the same time to help process traumatic memories.

Traditional talking therapies work with a top-down model, whilst art and body psychotherapies work from a bottom-up standpoint. EMDR on the other hand uses both at once from within the memory network. Traumatic memories which remain unintegrated as memory fragments can be triggered in the present leading to re-experiencing. These fragments of unprocessed trauma are stored in unconnected networks. EMDR allows these networks to link with each other, causing spontaneous insight and subsequent changes in perspective as bi-lateral connections are formed.

Unlike traditional therapy where these connections need to be spoken about repeatedly to change perspective, in EMDR the connections are made directly in the brain, and so the insight formed through Adaptive Information Processing are spontaneous and long lasting.

AIP was developed following clinical observation and describes both what we observe during EMDR and the resultant changes in the client ability to function. Working on the theory that all psychological disturbances are manifestations of unprocessed (disturbing) memories stored dysfunctionally in the brain. By focusing the work on the touchstone memory (the first or earliest memory of a specific type of trauma) you will be able to radically change how you view not just that event but all subsequent events which triggered the trauma response. 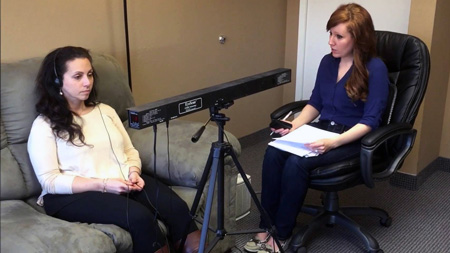 Some devices emit scrolling and moving lights in order to perform EMDR.

Bi-lateral stimulation is the aspect of EMDR most well known and this is most often performed via the therapist asking the client to follow the movement of their hand as they move it left to right in front of the client. However, this can be achieved in other ways. There are light up gadgets which scroll lights to be followed, and hand buzzers to be held in each hand where they buzz in turn to produce the same effect. For children, the option of tapping, either by a carer or the client themselves can be employed. The important part is that the attention is repeatedly drawn from one side to the other whilst mentally engaged with the touchstone as this is what promotes processing across both sides of the brain.

The therapist role in EMDR is to facilitate the right conditions so that the client can reprocess old material and reach and adaptive resolution. There is no need for insightful interventions as EMDR promotes the brain to process on it’s own without spoken insight. Our role is therefore to bear witness rather than to actively aid the resolution as it takes place. This can be difficult as it flies in the face of traditional therapies, however the results can be astounding.