Survivors of Domestic Abuse in Counselling

A lot of training on domestic abuse focuses on the abuser, but when Christiane Sanderson came to talk to us she focused on the effects on abusive victims coming to therapy, and on a wider definition of domestic abuse beyond the more widely understood physical element.

What is Domestic Abuse?

The Government defines Domestic Abuse as: “Any incident or pattern of incidents of controlling, coercive, threatening behaviour – violence or abuse between those aged 16 or over who are, or have been, intimate partners or family members regardless of gender or sexuality. The abuse can encompass, but is not limited to: psychological, physical, sexual, financial, and emotional.” (Home Office, 2015)

When domestic abuse is portrayed in the media the focus tends to lie on physical and sexual violence perhaps because these are the forms of abuse which result in tangible evidence of a crime. However, psychological abuse can be just as or more damaging for the victim, as it can break down the victims sense of self until they come to believe they deserve to be subordinate. 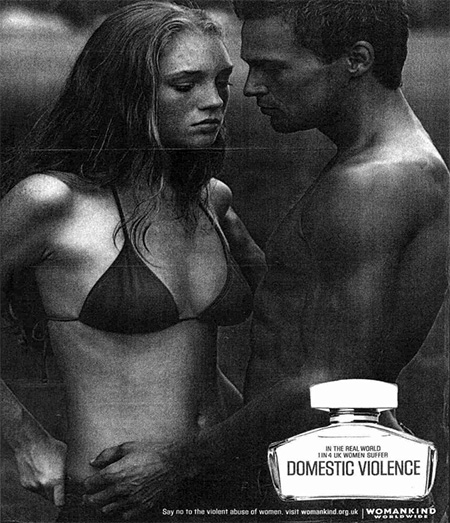 A print ad by Womankind highlighting the prevalence of domestic abuse and violence. Womankind works to end violence against women worldwide.

It’s also interesting to note from this definition that domestic abuse isn’t limited to intimate partners, but to family members as well.

The Nature of Domestic Abuse

Seemingly healthy relationships can become abusive, or abuse can be present from the start and worsen as time passes. Even in instances of seemingly isolated incidents, there can be more going on below the surface both prior to and directly following any assault or incident.

Where we think of an isolated instance of domestic abuse, we often ignore the cycle that surrounds it – that before action is taken, there is the threat of action hanging in the air.

Walker (1979) posited the cycle of abuse, a simplistic take on what goes on behind the scenes in an abusive relationship. The timescale of this cycle can vary in length from hours to years, but unless broken will continue to run beneath the surface of the abusive relationship. 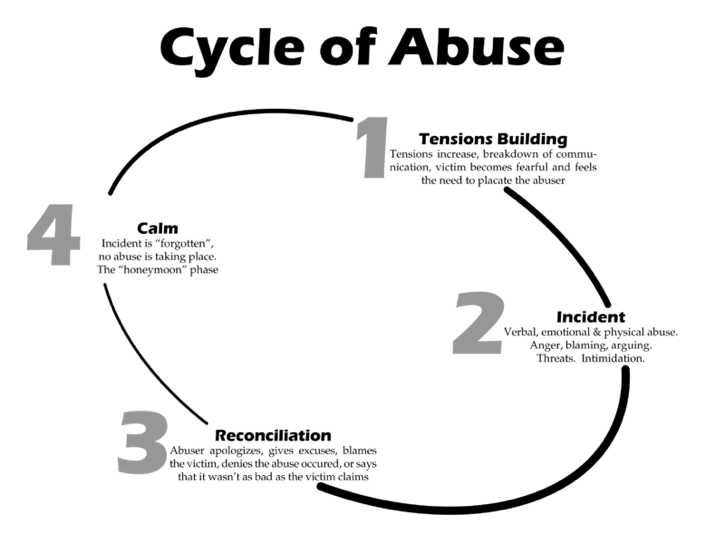 The cycle of abuse

In viewing domestic abuse as a cycle, we can see that for those involved there can appear to be no escape. Victims may even provoke their attackers once they sense the tension re-emerging in order to get the incident over with, and themselves back into the relative safety of the reconciliation or calm phases of the cycle. In this way they may begin to blame themselves for the attack, when all they have done is try to gain a sense of control which otherwise feels lacking.

Both men and women can be perpetrators of domestic abuse, although research suggests that different sexes may have a higher prevalence of different types of abuse, with women more often favouring coercive control, and men favouring sexual and physical assaults.

When it comes to categorising perpetrators of domestic abuse, it has been found that abusers can be found amongst all ethnicities, religions, sexes and sexual orientations. However, one thing they do have in common is charm (which is often instrumental in lulling victims into a sense of security before launching their attack).

When it comes to who may become a perpetrator however, there are a few factors which might indicate a higher potential…

Shame can play a critical role in domestic abuse both for victims (who may feel responsible for their position), and perpetrators (who cannot cope with internal feelings of shame and thus lash out), and this must be carefully examined in any therapeutic work surrounding domestic abuse.

Young people are at the highest risk of experiencing domestic violence in their relationships due to a lack of experience. If domestic abuse is experienced within their circle then it can become normalised before they have a chance to form a healthy image of what relationships can be. However, anyone of any age, gender, sexuality or ethnicity can become a victim of domestic abuse, and find themselves feeling trapped and powerless to their perpetrator.

Domestic abuse leaves emotional as well as physical scars, and the impact of it is often far-reaching.

It is paramount that any therapist working with a victim of domestic abuse be acutely aware of the possibility of secondary victimisation. Responses of friends, family and even professionals may all be purposefully or inadvertently blaming of the victim, and in therapy this must be closely guarded against.

There are a number of presentations that therapists working with survivors of domestic abuse should be aware might enter the therapeutic space beyond the client wishing to work through their abusive experiences. Here are a few that Christiane felt were most worthy of note:

So long as we are aware of the issues which can arise when working with this client group, and are confident we can listen without judgement, the therapeutic relationship (a non-hierarchical and collaborative experience) can help to promote autonomy and flexibility and to help the client rebuild relational worth.

It can be extremely hard to work with harrowing stories from clients and so therapist self care must be seen as of paramount importance in practitioners working with this client group. Here are a few ways to look after yourself.