The following article was is based around Dr Phil Mollon’s seminar hosted in February 2016 titled “The Disintegrating Self: Understanding and working with adults with ADHD and/or Autistic Spectrum traits“. It was written by our guest blogger Andy Darling. Here we look, in particular, at ADHD.

An understanding of ADHD and the autistic spectrum

Right at the start of his recently published work, ‘The Disintegrating Self ‘ (Karnac Books 2015), in a chapter entitled ‘Why this book was written – and why ADHD and autistic spectrum conditions are of interest to a psychotherapist’, Phil Mollon humbly but assertively sets out his stall, speaking of   ‘…an attempt at reparation for the lack of understanding I have no doubt shown, in times past, towards many clients when, in accord with prevailing assumptions and attitudes within the mental health professions, I may have placed too much faith in the dynamics of the psyche alone – as opposed to the psyche in relation to the brain and body’.

That sense that, when it comes to ADHD and the often overlapping autistic spectrum, many clients have been and continue to be misunderstood, misdiagnosed or undiagnosed, and consequently left with a dreaded sense of disintegration of the self, is the spur for what feels like a paradigm shift in ways of thinking and working. In short, this means acknowledging and understanding that this is a brain-based disorder, and then working with the interplay of the neurobiological and the psychological. This is far from being about discarding the psychodynamic approach; rather it’s an integrative model that could be said to have a revivifying effect on some classic psychodynamic concepts (see below).

To simply focus on the psychodynamics, though, can be harmful: a classic instance being the assumption that the cause of a child’s ADHD is poor boundary setting (poor family dynamics, in other words). The sense of blame, and consequent guilt and shame felt by family members can result in a ‘malignant escalation’ of the difficulties. Better, says Mollon, to also bring to the room an explanation of the neurobiological roots of the condition and what that means to all concerned, and then to work in an integrative manner with that awareness. ‘At last, someone understands!’ is often the relieved response.

That ‘at last!’ can also be heard and felt when adult clients come to realize that the hidden core within what’s perhaps been regarded as Emotionally Unstable Personality Disorder, Addictive Personality Disorder, or Borderline Personality Disorder, may actually be ADHD. There’s been a tendency to regard it as something only suffered by youngsters on high sucrose diets, and/or as a condition invented by Big Pharma, and this has done a huge disservice to sufferers. It’s helpful to think of it not as a categorical diagnosis, not as a single discrete syndrome, but more in terms of a number of forms and spectra, overlapping and with a comorbidity with other conditions. 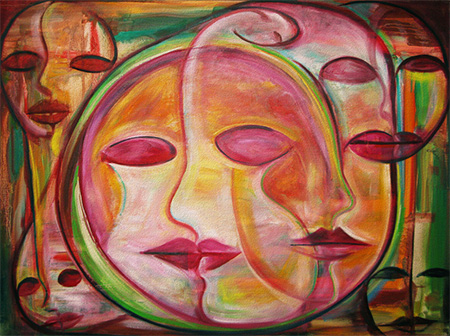 It’s important to understand ADHD from a neurological perspective, in addition to a psychological one.

The Broad Traits Of ADHD

ADHD from a neurological perspective

How does ADHD affect the brain? Genetic of origin, impaired functioning of the frontal lobes, the ‘executive’ part of the brain, is thought to be the key problem, resulting in dysregulation of attention, behaviour, impulses and emotions.

The basal ganglia, a group of grey matter neurons, which has a key role in motivation, tends to be underactive in those with ADHD. It can feel as if the brain isn’t fully awake. Conflict, drama, stress and negative thoughts are routes often taken to ‘wake the brain up’. Positive thoughts appear to have a far less energizing effect.

The cerebellum, which is involved in the judgment of time and the processing of temporal information, doesn’t appear to function efficiently, the result being some clumsiness and lack of coordination, and ‘brain fog’ around memory.

The corpus callosum, located at the ‘crossover’ point between the right and left hemispheres of the brain, has a reduced volume, and the lack of cooperation and communication between the hemispheres can result in difficulties with attentional processing; a lack of empathy can ensue from an underpowered right hemisphere.

The Default Mode Network (DMN) describes coherent brain activity that takes place when we’re not focused on a particular task. The activity of DMN should subside when there’s a specific task to engage with, but in people with ADHD it doesn’t shut down, and thereby disrupts focus. Contrastingly, DMN activity for those on the autistic spectrum tends to be low, with a resultant lack of daydreaming, introspection and reviewing of emotional information.

People with ADHD produce lower levels of the neurotransmitter dopamine, which modulates pleasure, reward and feelings of wellbeing. This explains why instant hits of pleasure, often via addictive substances and behaviours, are sought, and it’s why stimulant drugs tend to be prescribed, to increase those dopamine levels.

ADHD from a psychological perspective

The diminished ability to self-regulate, resulting from the impaired frontal lobe functioning, means there’s an increased need for regulatory assistance from other people, or ‘self-objects’ as Kohut puts it, thus enabling the ‘dyadic regulation of affect’.

With reduced capacity to control proliferating thoughts, anxieties and impulses (linked to the diminished self-regulation), Bion’s concept of alpha and beta elements is pertinent: it’s desirable to be able to transform our raw, unprocessed, primitive beta elements (those roars and rages) into healthy alpha elements – sublimation, in other words – but this doesn’t always happen consistently for those with ADHD. Bion was speaking of psychosis, but there’s a parallel with ADHD: ‘If the patient cannot ‘think’ with his thoughts, that’s to say he has thoughts but lacks the apparatus of ‘thinking’ which enables him to use his thoughts….(then) the first result is an intensification of frustration’ (Bion WR, Learning From Experience, 1962)

Freud’s superego, when working correctly, functions as an internalized regulatory agency, prohibiting what needs prohibiting. With ADHD, though, the initial taking in of an external authority that then becomes internalized, sometimes doesn’t progress smoothly. It’s as if Lacan’s mirror stage has gone into overdrive, and external images feel invasive and are then angrily expelled. There can thus be a raging opposition to prohibitory intrusions. The therapist can be regarded as one such prohibitory presence, and rejected.

Phil Mollon has found that ‘engaging with the energy system (acupressure meridians and chakras) concurrently with addressing thoughts and emotions can provide a much more rapid and complete resolution of distress’. Approaches here include EFT (Emotional Freedom Techniques) and various breathing and coordination exercises. One particularly recommended exercise to help a person overwhelmed with emotion, and incoherent in speech (typical ADHD behaviours) become more calm, fluent and thoughtful, is Modified Collarbone Breathing. Here’s how to perform it: